It all happened innocently enough. The year, 2008. The day, Saturday. The family had nothing to do. With time on our hands, and nothing to eat in our fridge, we decided to make a mid-morning foray to Aretha Frankensteins, known for their killer breakfast burritos and sloth-paced service. It was busy and already hot outside and flies were making camp at the tables so, as fate would have it, we ended up inside next to the Pac-Man arcade machine.

Then I saw it, the framed images that would soon change the direction of my life’s creative journey: a collage of old-school Wacky Packages. How could I have forgotten? The cards were more than a fad to me between the ages of 8 and 10. They were sources of endless fascination and a weird, pre-adolescent rebellion. I never had enough money to collect all the cards I wanted. Opening each pack, laden with sugar-powdered gum, was pure excitement and anticipation. I have no idea what became of my collection of nearly 200.

“How much?” I asked the Frankenstein’s manager. They were not for sale.

But wait! I could find them online.

Sure enough, not only could I find the old ones I’d so confabulated, but there was a whole history of Wackys, and a series of new releases. The following months held a quiet joy to me as I opened box upon box of new and old Wackys–all under the guise that this was really in support of Eliah’s (he was six) new fascination. A kind of father-son bonding thing.

All those 25+ years later something had happened. The fascination remained obscured by my adult-ness. Now, they felt much more like a collector’s item and less like…I couldn’t put my finger on what exactly. I tried everything. Well, not everything. I didn’t go to the length of Greg Grant (featured in this YouTube video), but I did what I reasonably could. “We” got Old School Series and New School Series (which definitely aren’t the same as the artwork by Norm Saunders!); we collected entire sets and arranged them in order; completed the puzzles on the back sides of the cards; even made our own framed collage. Nothing helped. My childhood exhilaration was lost to me. Forever. 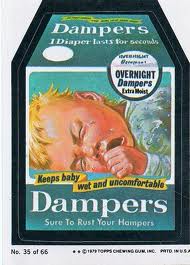 A couple of years later, a concept emerged for a novel. I was conceiving an American zeitgeist novel. Something that takes place in a very limited amount of self-important time, in which the narrator is surrounded by the pop cultural images that constitute his identity and basically his entire “reality.” He doesn’t resist. In fact, he has become so much a part of his marketing and capitalistic culture, he revels in his senses’ bombardment. His years-long marital struggle and fruitless attempts to procreate are the center of his soul’s struggle and create the narrative tension as he skitters across town. The original images centered on Wacky Packages. Some of the themes focus on the hollow struggle to bring back the past. The novel became The Director of Happiness.