The first time I ever heard Led Zeppelin in 1985 I was almost fourteen. It was the summer before I became a high school freshman, and I was already training for the cross country team. I remember the moment. It was

sort of like losing my virginity. I’d just finished a long run with my friend Scott Riddell and we were driving home in his Pinto which he’d rigged with a stereo system surely worth more than the car. It was “Black Dog,” the first song of Led Zeppelin IV. I didn’t love or hate it. I was mostly overwhelmed. I’d never heard anything quite like it, from the past or present. The guitar riff had a horn-like tone, the drums thunderous. Not classifiable. What really gave it that odd, mysterious sort of sound though was Robert Plant’s voice. Plant had this capacity, in his voice and persona, of containing multitudes, at once bold and masculine and yet also sensual and almost feminine. It was a strange blend. For me, it was a turning point.

Up to that point I had embraced the pop music that my dad liked and on some level approved of. Bruce Springsteen, Dire Straits, Genesis. I’d taken to The Violent Femmes a few months back, but for as classic as that first album of theirs will always be, you pretty much consume that content pretty fast. Soon I was on my way to getting a lot of mileage out of ZZ Top, Van Halen, even Iron Maiden and Metallica and who knows what all. But Zeppelin. Led Zeppelin. It’s like they had a secret sauce no one could really predict the outcome of.

Put it this way, a couple of years later, I did literally give away my virginity while playing the B side to Led Zeppelin IV. As Plant often said at the beginning of their “Stairway to Heaven” live performances, “This is a song about hope.” When that song ended, I was left hoping that sex would get better.

The puzzling thing to me about Zeppelin is that the music really isn’t given its due. People get lost in the look, the style, the rumors, what they seem to symbolize. They may be forerunners of a “whole lotta” things in popular music, positive and negative, but let’s get one thing straight: They are not the forerunners of heavy metal. Not even close. Blues bombers? I guess you could 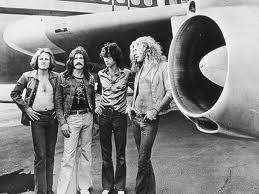 make more of an argument for that, but not exactly that either. Way too creative and way too varied. In a lot of ways these dudes were hippies. I mean, how many heavy metal bands or “blues bombers” feature a lead singer hitting on a tambourine? Yes, Plant does in fact galavant on stage tapping a tambourine and bobbing his head during Jimmy Page solos. Hanging Chad does not kid about such things. Plus, they lived on farms, okay? They lived on farms in England.

Things got sleazy, though. I mean, really quite bad. One would have to think that today not only would the rumors and  antics not be mythologized and revered, but that they couldn’t even begin to get away with it all. Apparently, John “Bonzo” Bonham was a very nice guy when sober, but a maniac when drunk–which he was a lot during the 70s. It doesn’t help that manager Peter Grant, an imposing figure with a massive frame and 6’5 height, intimidated show managers and anyone attempting to profit on Zeppelin’s merchandise. Not necessarily a bad thing. Still, was it easier to be Led Zeppelin then or Bob Dylan?

The band never had the prolific songwriting talent or melody-making as The Beatles, of course, nor does it quite have the business genius and endurance as The Rolling Stones (just compare The Stones continued push to the very latest about “any kind of reunion” for Zeppelin), but their legacy in rock and roll culture, permeates even in today’s shallow, processed, cheesy, glamrock, Clear Channel-dominated landscape. I could have sworn that the band Cameron Crowe based Stillwater on in Almost Famous was Led Zeppelin, but apparently it was the Allman Brothers. Whatever the case, Led Zeppelin’s influence is all over that 2000 classic. They do occasionally go on tour, as they did in 2007.

Truth? I did write a prose poem, “Letter to Plant from Easter Island,” which was published in a couple of different books in ’07 and ’08, and reasonably reviewed by Claire Keyes. Has anyone ever figured out why John Paul Jones has always kept his distance from Page and Plant? Was it all the craziness of the past? Or is their some kind of rift? He seems always to have kept a distance.

I’m not proud of a whole lot about the band’s biography, but I stand by their music–and my experience.