It’s easy to lose sight of the literature in all the design and “game” components to Interactive Fiction. Partly this is because of the challenge of where does the game begin and the story leave off and vice-versa. Partly this is because stories are often just grafted on to what is really a game. Partly because we are only on the verge of what these emerging technologies can offer. And also partly due to the fact that people are simply more interested in games and technology than in the literature. I would also suggest we haven’t written compelling enough literature–either of a serious or more “entertaining” nature.

1. Eastgate publishes publishes superb, original hypertext fiction, nonfiction, and poetry, and they create innovative tools for hypertext writers. Their outstanding hypertexts are collected in libraries and studied in universities and schools throughout 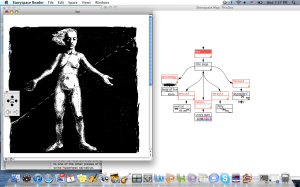 the world, and have been widely discussed in the research literature. While about ten years ago you might have thought this was the literature of the future, it remains marginalized. There are few publishers who do (or have done) what Eastgate continues to do. Michael Joyce’s Afternoon is a pioneer in the hypertext fiction realm, and Shelley Jackson’s Patchwork Girl

2. Inklewriter Studios was founded in 2011 by two Cambridge game developers with a passion for storytelling and beautiful design. A part of the Interactive Fiction movement, Inklewriter has created a beta version of ways to write your own Choose Your Own Adventure style fictions. Jon Ingold, the company’s creative director also discusses the ways in which he works hard to integrate gameplay with story in meaningful ways.

3. Blue Flame Publishing, another UK publishing group,  publishes “gamebooks.” And also like Inklewriter, they will first publish in the fantasy genre.

4. Green Door Labs, a small, friendly “game design on demand” team, offers a simple platform to create your own scavenger hunt, interactive story, or choose your own adventure mobile. They’re also active in developmental programs for education and creative storytelling.

5. Choose Your Story is mostly fantasy writing and is more of a forum for experimentation, but what one can tell is that there are many practitioners of all kinds working the with the possibilities of multiple story strands.

6. Malinche claims to be “the only” Interactive Fiction publisher in the world. There is work to be done there, but they do offer some samplings.

7. Random House (UK) even seems to be dabbling in the game of IF with the recent release of the “disturbing” Black Crown. The promise not to have loads of messy loose ends such as Twin Peaks and Lost, one of the legitimate problems with crafting “a made thing” out of this kind of literature. Their tagline is, “You won’t know what’s going on, but finding out is most of the fun.”

In fact, that’s just the case with this literature. Do we call it “experimental,” “Interactive Fiction,” or “game literature”? Is it better conscribed to science fiction and fantasy genres, or is it a legitimate domain for literary endeavors? Stay tuned.