At first I was bothered by the whole idea. I don’t want to be worried. Things can happen, but why should I hear super-sophisticated reasons for why I should worry? This is partly because What Should We Be Worried About? opens with the possibilities of war and cyber-terrorism–even if the chances are low for either. But as I stuck with it, and danced around, I got a growing sense of the multiplicity of ideas, and began to feel that the scope of the book in its entirety creates awareness. Much of it is cultural preparation, what’s at stake (and why) in the world we live in today.

If you haven’t heard of Edge, the Internet salon around which John Brockman’s life now revolves, it’s time. A veritable case-in-point for what Steven Johnson says is the most effective way for innovation to happen, Edge is the meeting place for the cyber elite, the most illustrious minds who shape the emergence of the latest developments in the natural and social sciences, whether they be digital, genetic, psychological, cosmological or neurological.

They’ve been asking an annual question for years now. For 2013, Brockman asked contributors to disclose something that, for scientific reasons, worries them—particularly scenarios that aren’t on the popular radar yet. There are 150 ideas worth considering and expanding your awareness.

The scope of the overall book is illuminating and gives you a strong sense of what’s right on the horizon for us in terms of the complexities of global system, cultural shifts, and scientific and technological leaps. What do they mean for the self? for the soul? Five contributors are highlighted below. 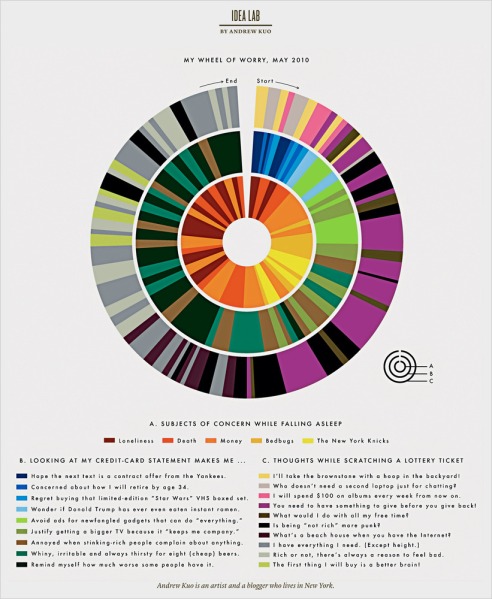 My Wheel of Worry, originally published May 16, 2010 in New York Times Magazine. Andrew Kuo presents his inner worries, arguments, counterarguments, and obsessions in a three-tiered graph.  Kuo illustrates the things in his life that concern him and his specific feelings about each.

Tim O’Reilly, founder and CEO of O’Reilly Media, worries about “The Rise of Anti-Intellectualism and the End of Progress.” His short but cogent essay examines the fear of what can and does happen to our civilization when the ideas die, as they did in Rome.

Yes, we may find technological solutions that propel us into a new golden age of robots, collective intelligence, and an economy built around ‘the creative class.’ But it’s at least as probable that as we fail to find those solutions quickly enough, the world falls into apathy, disbelief in science and progress, and after a melancholy decline, a new dark age.

Civilizations do fail. We have never yet seen one that hasn’t. The difference is that the torch of progress has in the past always passed to another region of the world. But we’ve now, for the first time, got a single global civilization. If it fails, we all fail together.”

Biological anthropologist Helen Fisher worries that there isn’t enough understanding of men and their capacity for love in “Myths about Men.” Brain science is revealing all kinds of empirical evidence about men that run against the grain of our typical perceptions.

Men fall in love faster too—perhaps because they are more visual. Men experience love at first sight more regularly; and men fall in love just as often. Indeed, men are just as physiologically passionate. When my colleagues and I have scanned men’s brains (using fMRI), we have found that they show just as much activity as women in neural regions linked with feelings of intense romantic love. Interestingly…when men fall in love, they are faster to introduce their new partner to friends and parents, more eager to kiss in public, and want to ‘live together’ sooner. Then, when they are settled in, men have more intimate conversations with their wives than women do with their husbands—because women have many of their intimate conversations with their girlfriends. Last, men are just as likely to believe you can stay married to the same person forever (76% of both sexes). And other data show that after a break up, men are 2.5 times more likely to kill themselves.”

Computer Scientist David Gelernter’s “Internet Drivel” may sound a bit like a pedantic professor, but it should give us pause to consider the basic premise about the potential for the devaluation of words when so many are constantly needed. It’s a paradox that words are needed more than ever, yet with so much constant output they also tend to be devalued, especially in terms of craft.

The internet’s insatiable demand for words creates global deflation in the value of words. The internet’s capacity to distribute words near-instantly means that, with no lag-time between writing and publication, publication and worldwide availability, pressure builds on the writer to produce more. Global deflation in the value of words creates pressure, in turn, to downplay or eliminate editing and self-editing. When I tell my students not to turn in first-drafts, I sometimes have to explain, nowadays, what a first draft is.”

Kirsten Bomblies is Assistant Professor of Organismic & Evolutionary Biology at Harvard University. She worries abstractly in “Do We Understand the Dynamics of Our Emerging Global Culture?” that we’re in over our heads. While her worries may be general, the concept of the homogenous, ubiquitous culture we’re growing into is certainly a theme that pervades the entire collection.

Humanity is building a global superculture. We know it’s dynamic and exciting, but do we understand what we are getting into? Like more local cultures, this global one exists in a parallel world of information only loosely tied to physical substrates or individual minds. It has a life of its own, and we do not fully understand its evolutionary potential. As a result, we probably do not adequately appreciate the possible hazards associated with it. What unanticipated emergent properties might a globalized culture have?”

Journalist and Editor, Luca de Blase, has a thoughtful and surprising call to action in “The Cultural and Cognitive Consequences of Electronics.” The way to more intelligent examination of our growing knowledge and access to information is through the humanities? Things certainly don’t seem to be trending that way. But his argument stands as case-in-point for what many are hopeful for, and what hanging chad is all about.

We are looking for ways to let our imagination be free, to breathe new ideas, to think in a way that is not explained only by the logic and the incentives of the mediasphere.

How can it be possible? Poetry is a kind of research that can help. Digital humanities are a path to enhance our ability to think differently. An epistemology of information needs to be developed.

Knowledge is meant to set us free, provided that we preserve our ability to decide what it is important independently from what is defined as such by the platform we use. Freedom of expression is not only the quantity of different ideas that circulate, the wealth of which has never been so rich as today. Freedom of expression is also about the decision-making that lets us choose ideas that are better than others to improve our ability to live together. We should be worried about how we go about finding the wisdom to allow us to navigate developments as we begin to improve our ability to cheaply print human tissue, grow synthetic brains, have robots take care of our old parents, let the Internet educate our children.”