“I believe that it is bracing and vital to live in a world in which we do not know all the answers.”

Alan Lightman holds a double appointment in physics and the humanities at MIT. This rare combination is exactly what our “multi-culture” needs: a humanist-scientist on the cutting edge of his craft from, well, both directions. To be a scientist and a person still full of wonder about life’s mysteries really shouldn’t be so uncommon, but it is.

“Science has vastly expanded the scale of our cosmos, but our emotional reality is still limited by what we can touch with our bodies in the time span of our lives,” Lightman writes in his latest, The Accidental Universe: The World You Thought You Knew. He tries to make sense of how it is not only possible to coexist in the spheres of the humanities and sciences, but how it is essential to our understanding of our universe and ourselves. He begins with a discussion that undermines both what religion and science thought they knew. Up until the past few years scientists thought they were getting close to a Theory of Everything.

According to the current thinking of many physicists, we are living in one of a vast number of universes…a universe uncalculable by science.”

And at the same time the multiverse idea offers an explanation of why we find ourselves in a universe “favorable to life that does not rely on the benevolence of a creator.” So what does that matter? Because then there are limitless ways for life to occur–from universe to universe. It’s a refreshing corrective to the Intelligent Design construct too.

But still he finds wisdom through all the ways he comes “to know” the world.

Lightman has a light touch when it comes to shedding light on highly abstract theories and bringing them to bear on human concerns.

A line of white light coming from the center of Galaxy Centaurus A is the result of a supermassive black hole at its center.

The Accidental Universe also explores such magnificent mysteries of our world and the cosmos as dark matter, multiverses, and the arrow of time, all considered through the dimensional lens of a mind at once voracious for knowledge and at peace with the unknown.

Faith is the willingness to give ourselves over, at times, to things we do not fully understand…the full engagement with this strange and shimmering world.” 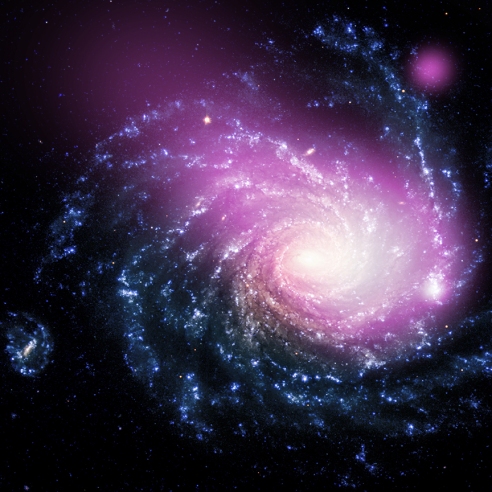 A massive cloud of multimillion-degree gas in a galaxy about 60 million light years from Earth.

Lightman also repudiates the mocking certainty espoused by crusaders for the scientific worldview who view religion as a plague. He does endorse “the central doctrine of science,” and does not “believe in the existence of a Being who lives beyond matter and energy, even if that Being refrains from entering the fray of the physical world,” as does the deity of deism and what Lightman calls “immanentism,” the God envisioned by Spinoza and Einstein. Yet he also believes “there are things we take on faith, without physical proof and even sometimes without any methodology for proof. We cannot clearly show why the ending of a particular novel haunts us…We cannot prove the meaning of our life, or whether life has any meaning at all.”

All theories require a certain amount of belief in what can’t, no matter how much we know, be proven. In the end “we are made of star stuff,” as he says, connecting us back to the wild “nature” that is the otherwise inhospitable universe(s).

You might say that Lightman contradicts himself by calling himself an “atheist” at one turn, and then quoting Rilke about “living the answers” at another. He certainly has a Carl Sagan-like ability to boggle your mind with cutting-edge science and mathematical data about our multiverse only to complement it with grounded, soulful detail. I think he’s constantly dealing with contradiction and absorbing–and sharing–it in unprecedented ways in these essays.

The Accidental Universe is disorienting but somehow still incredibly readable and compelling. It challenges us to consider what we know, what we think we know, and what we’ll never know–and how a life lived in such uncertainty is what most feeds the human soul.