“Literature is the most agreeable way of ignoring life.”

The Book of Disquiet stays with you, doesn’t want to be consumed all in a rush, and is unlike any other book you’ll ever read. In fact, the book stayed with Pessoa himself, discovered after his death in a trunk full of thousands of unpublished pages and not published until many years later. Signed under the semi-heteronym Bernardo Soares, with a preface by Fernando Pessoa, Disquiet is a fragmentary lifetime project, left unedited by the author, who introduces it as a “factless autobiography.” Lots of authors say their book is “one of a kind,” but this one stands the test of time. The Norwegian Book Club that listed Disquiet as one of the 100 best works of fiction of all time, based on the responses of 100 authors from 54 countries, has a strong case.

It consists of aphorisms, some as short as a single line, others as long as three pages, and to read too many at once muddles the arguments and wisdom of them. Not that Disquiet isn’t complete. In its determined melancholy, gentle audacity, and insistence on renunciation, frustration, and solitude as the essence of life, it is whole. And that’s only part of what makes is so disarming–and disquieting.

I’d woken up early, and I took a long time getting ready to exist.”

Its floating boundaries expand and contract, animated by “the horror of making our soul a fact.” As Pessoa/Soares writes,

Presumably it was this perfectionism that prevented Pessoa from publishing more than one book in Portuguese during his life. That was a book of poetry, a nationalistic collection called Mensagem (Message), and for many years Pessoa was known only as a poet–and a quiet book keeper. He and his three main heteronyms are indeed very good poets, but it seems that it was as Soares and in the prose of The Book of Disquiet, where he wrote of the “desire to die another person beneath unknown flags,” that he found himself more truly. Once he settled in Lisbon, he rarely left, preferring the advantage of his interior travels to exterior ones.

In order to understand, I destroyed myself.” 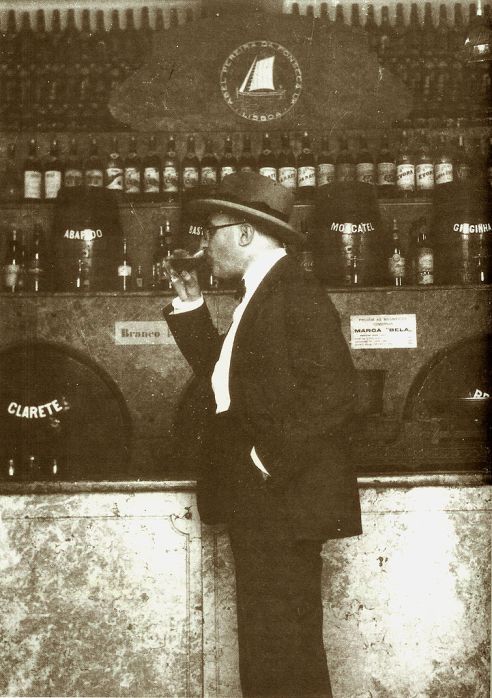 He did frequent cafes and bars, keeping to himself, drinking copiously and chain smoking.

The heteronyms allowed him to disown his words even as he wrote them. They formed a small society of alter egos, “a whole world of friends inside me,” and they were united above all by their conviction that the soul has no product.

I’ve always felt that virtue lay in obtaining what was out of one’s reach, in living where one isn’t, in being more alive after death than during life, in achieving something impossible, something absurd, in overcoming–like an obstacle–the world’s very reality.”

Richard Zenith, editor of a new Portuguese edition, in 1998, took the option of a single volume, as in his first translation, back in 1991. In his introduction, he writes, “If Bernardo Soares does not measure up to the full Pessoa, neither are his diary writings the sum total of Disquiet, to which he was after all a johnny-comelately. The Book of Disquiet was various books (yet ultimately one book), with various authors (yet ultimately one author), and even the word disquietude changes meaning as time passes.”

The fragmentary, the incomplete, is of the essence of Pessoa’s spirit. The very kaleidoscope of voices within him, the breadth of his culture, the universality of his ironic sympathies–wonderfully echoed in Saramago’s great novel about Ricardo Reis–inhibited the self-satisfaction of completion. Hence the fragmentary condition of The Book of Disquiet which contains material that predates 1913 and which Pessoa left open-ended at his death. Lisbon is haunted by his many lives.

I, however, who in this transitory life am nothing, can enjoy the thought of the future reading this very page, since I do actually write it; I can take pride–like a father in his son–in the fame I will have, since at least I have something that could bring me fame.”